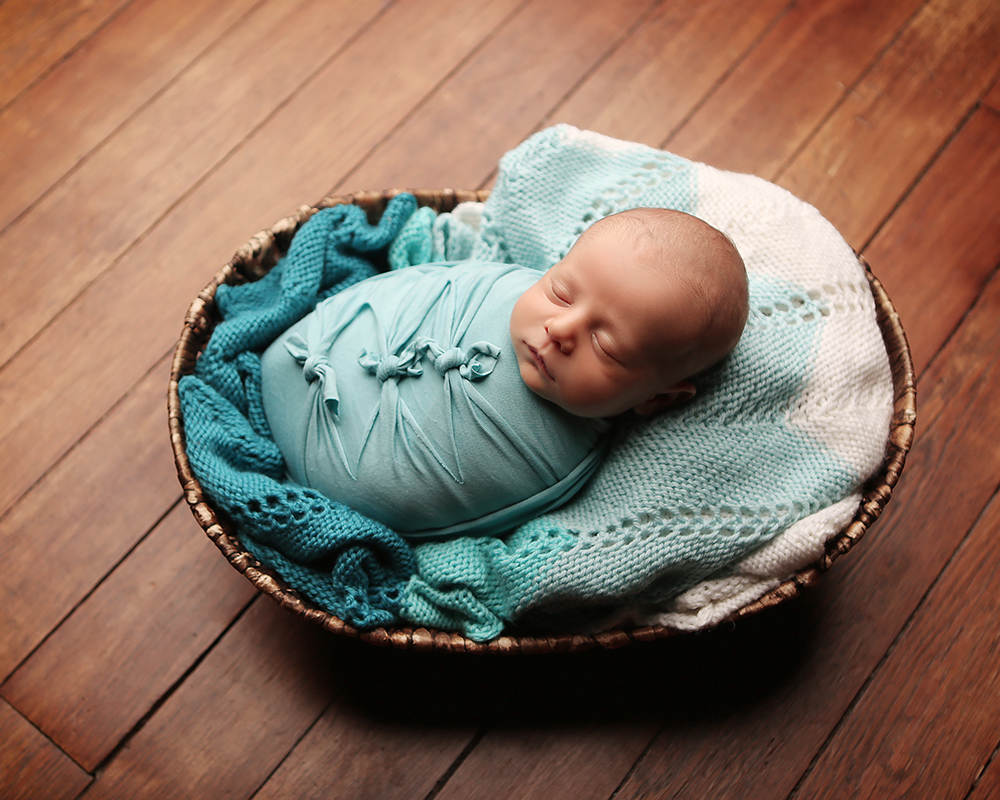 Sweet newborn baby Thomas Daniel was in recently for his newborn photoshoot.  We did a wrapped mini photoshoot with baby Tommy, and even incorporated a very special afghan that was made just for him!

I had the opportunity to catch up with Tommy’s mom, Hannah, recently to find out how these first few weeks and months of parenting a newborn baby are going for her.  I caught up with her as she was vacationing with baby Tommy in Michigan.   He even went on his first boat ride!  Hannah says he seemed to enjoy it.  “He held his head up and looked around, then he fell asleep.”  Yeah Tommy for your first time riding the waves!  Here’s more of my conversation with baby Tommy’s mom Hannah. 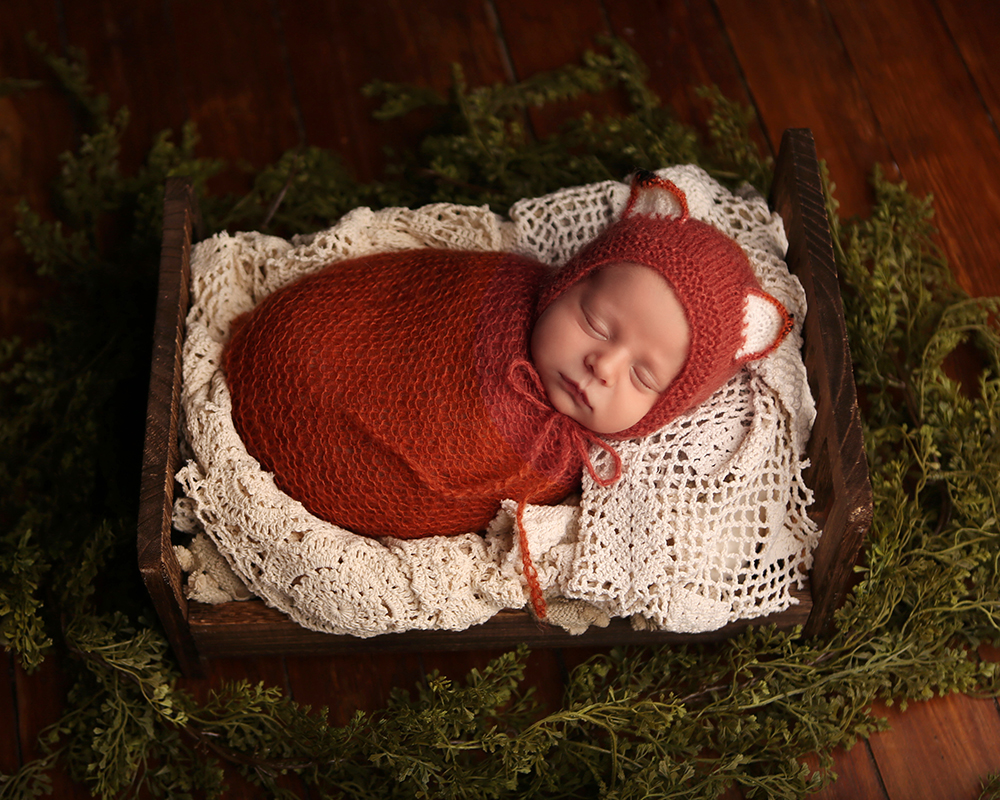 He’s doing good.  He’s growing and eating a ton, just being a baby. 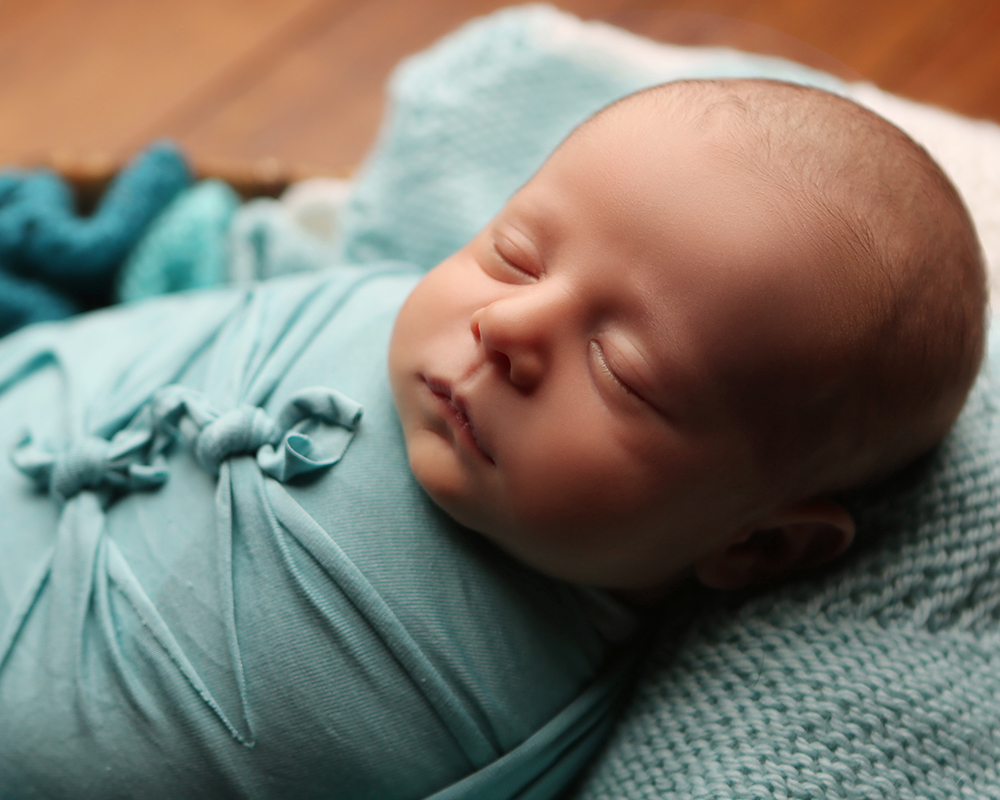 How did you come up with your newborn baby’s name?

My husband’s name is “Tom” and so is his dad.  And my dad is “Daniel” so we named him after both the grandpas.  That’s how we came up with the name “Thomas Daniel.”  He’s named after both of his grandfathers.  They were both very very excited about his name! 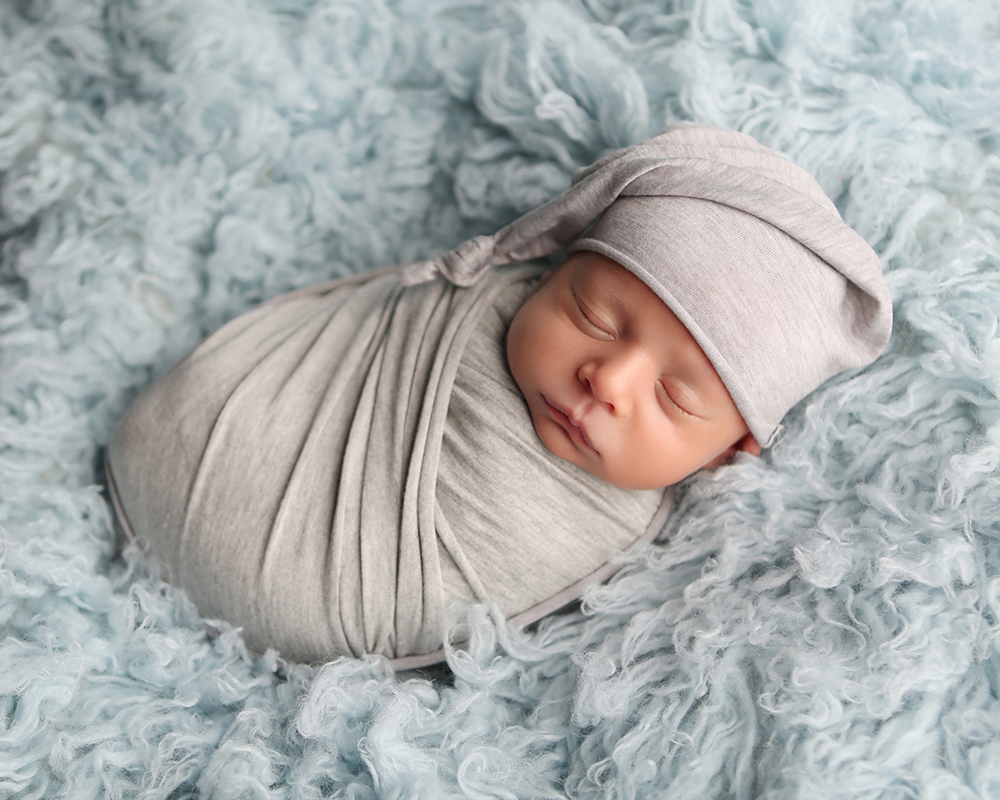 How have the first few weeks of parenting a newborn baby been?

He’s going to be 8 weeks old this week.  Parenting has been good.  You do lose a lot of sleep for sure.  But it has been rewarding since he’s socially smiling now, he’s very playful and likes to smile a lot.  He’s a very energetic little baby.  He’s very fun to hold. 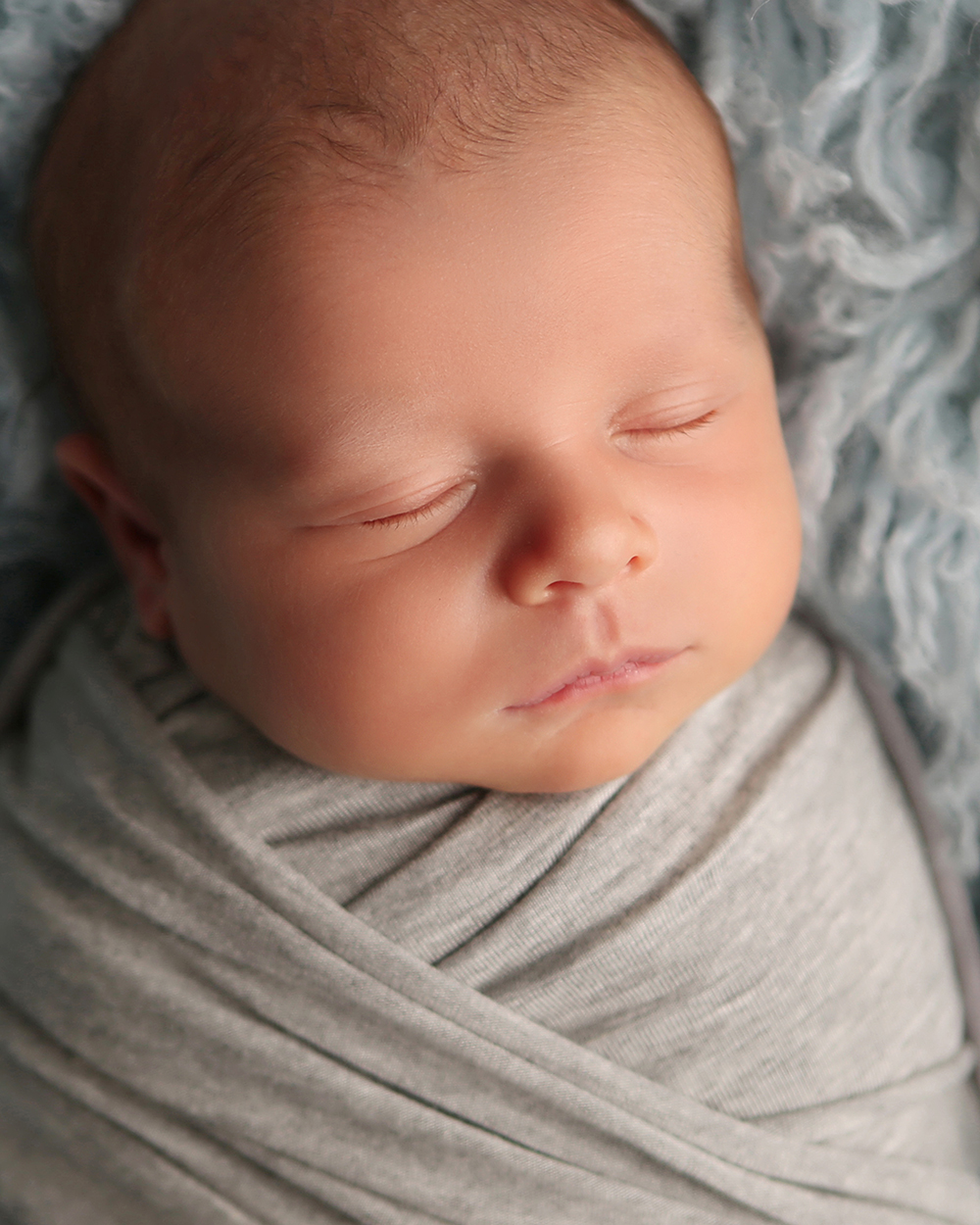 Is your baby sleeping through the night yet?

He’s waking up every four hours.  It used to be every two so I’m glad for the extra two hours of sleep, thank goodness!  The lack of sleep brings me back a bit to my college days. 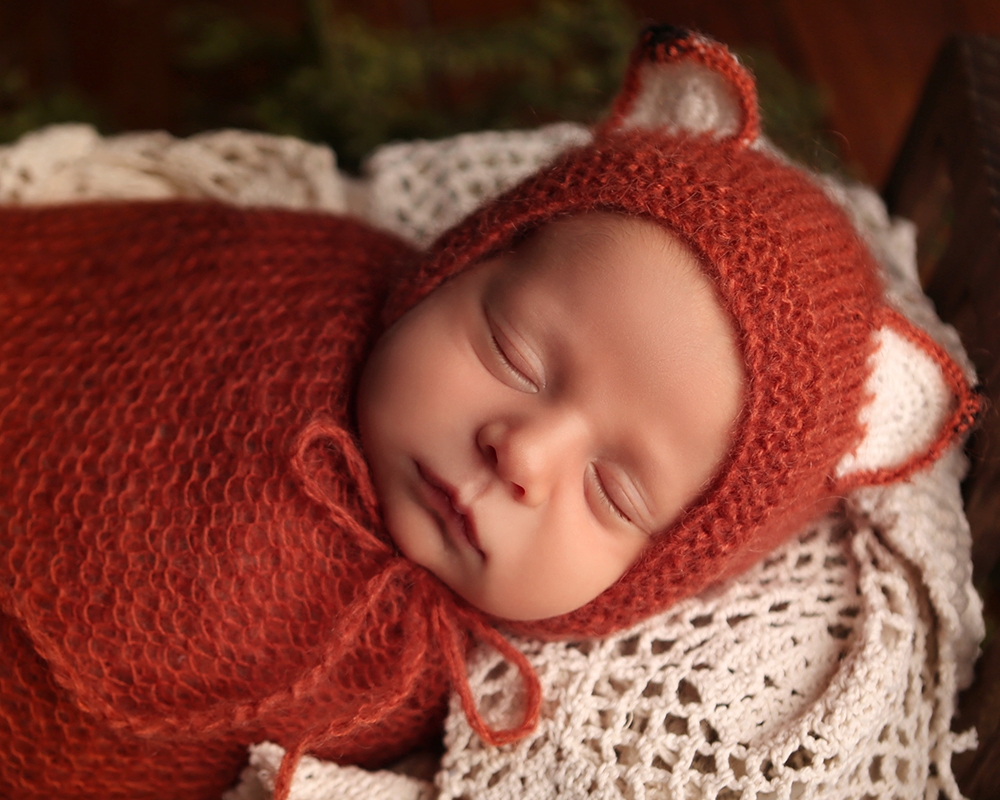 What about parenting a newborn baby surprises you?

I work with children, but my husband has never worked with children.  Definitely him being a lot more patient and calm, he absolutely loves Tommy.  Just the immediate love you feel for your child, you don’t experience that a lot.  That’s a really nice part about being a parent.  It’s a lot of work but there are some rewards.

What’s your favorite thing about being a new mom?

My favorite thing about being a new mom is that I get to watch a lot of chidlren”s movies with him, so that’s nice.  We weatch movies together.  Just because it has a lot of nice music in the background.  He doesn’t really know what’s going on but I like the nice music.  I also love waking up because it’s so fun to wake him up in the morning.  He’s always so excited.  It’s such a nice way to wake up!

What’s the hardest part about parenting a newborn baby?

It would definitely say the sleep deprivation and sometimes when he’s crying and we don’t really know what’s going on and it’s typically at like two in the morning and you’re like “why are you crying?  we fed you, changed your diaper, what’s happening?”  It’s good that my husband can switch off so I’m not staring at him.  That’s definitely the hardest part.

Has he met the relatives yet?

My mom was at his birth so she got to meet him right away.  And he met my dad when he was just five days old.  And he met his other grandparents, my husband’s parents, the day after he got out of the hospital.  It was really nice.

What is your favorite newborn baby product?

He has a baby rash cream, I think it’s called Baby Bum cream, that’s been really helpful.  We definitely love the sleep sacks.  They’re a lifesaver!  He sleeps in them almost every night because I can’t do the swaddling really well neither can my husband, so it’s nice because you can just zip it up and wrap him in it, it’s nice and secure so it helps him fall asleep at night.  These are wonderful!

Any baby product you bought and don’t use?

There are some pacifiers that he won’t use at all.  You wouldn’t think babies would be fickle about pacifiers, but he is.  He only likes a certain brand, and we got maybe 20 different pacifiers, maybe not 20, but a bunch of different pacifiers and there are certain kinds he just won’t use.  We’ll offer it to him and he’ll use it for a second and spit it out.  He’s very picky with that.

Do you have a favorite newborn parenting book?

“The Newborn Handbook.”  It’s really helpful.  A pediatrician wrote it.  She goes over the first 12 weeks on what to expect, which is really nice, so if I don’t have an answer, I can just look it up in the book.